Special event in Albany brings together lawmakers, law enforcement and hundreds of pet owners and animal advocates to speak-up for our four-legged friends 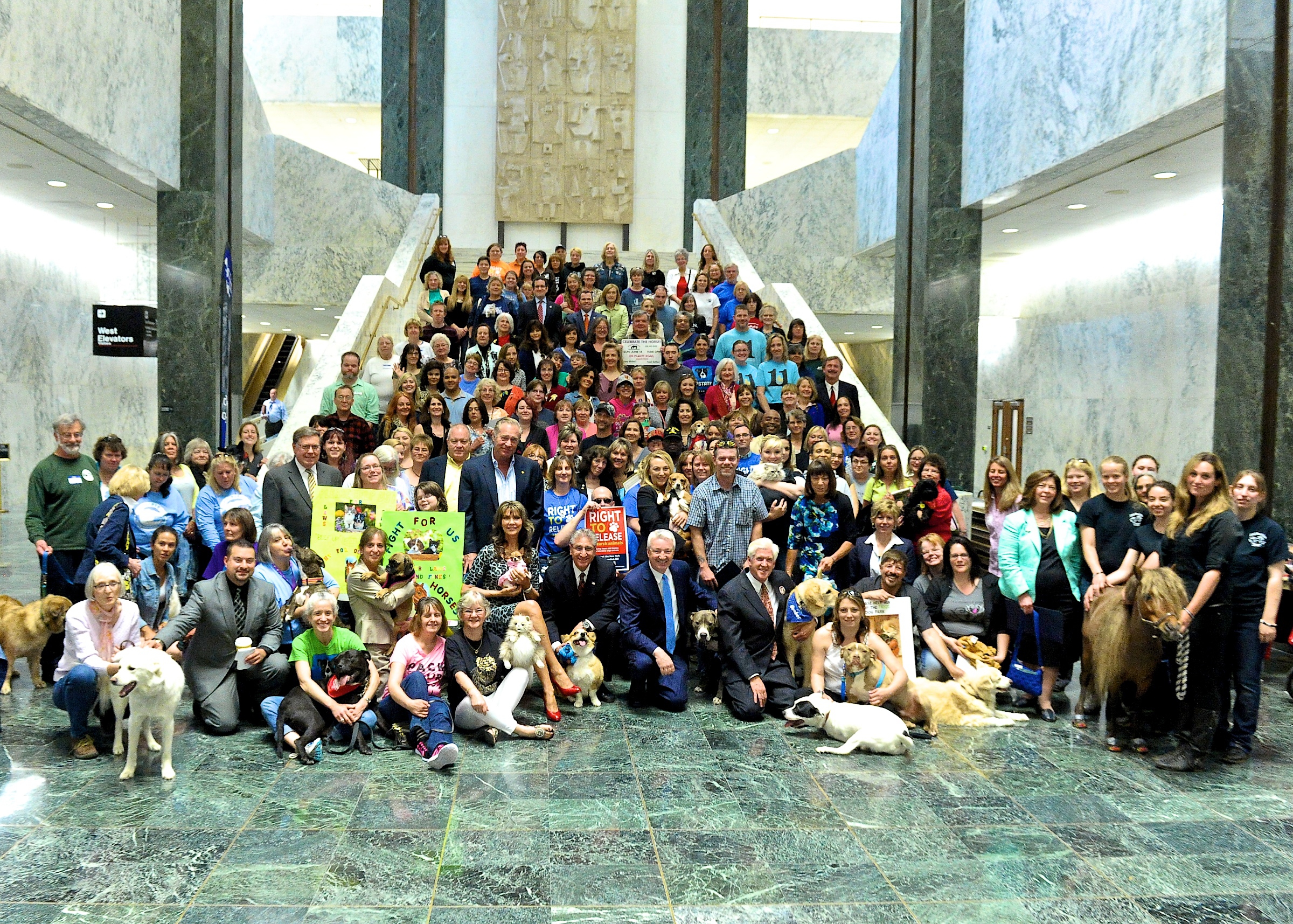 Among the legislation they called for was passage of bi-partisan legislation (A.2484/S.2935) with Majority sponsors in both houses that would create a statewide registry for convicted animal abusers to ensure they can never adopt or purchase an animal again and that they receive psychological evaluation and treatment.

In January 2016, the FBI will be moving animal cruelty to a top tier Group A offense in its crime reporting statistics due to it being a bridge crime as animal abusers can, and often do, go on to harm people.

“We have an obligation as a government to protect all members of our family, including those who have no voice. Animal Advocacy Day matters because it’s about more than just protecting our four-legged friends, it’s about keeping people safe from harm.  Just as important as strengthening our laws, Animal Advocacy Day aims to educate the public and law enforcement about the value of our companion animals and the importance of enforcing existing laws,” said Assemblyman Jim Tedisco, Assembly Chair of Animal Advocacy Day.

“Animal Advocacy Day is an important annual event for the legislature to come together to be a voice for our furry and feathered friends," said Senator Phil Boyle, Senate Chair of Animal Advocacy Day. "I'm so pleased to join with Assemblyman Jim Tedisco, Senator Sue Serino and hundreds of advocates as we send a message to protect all animals in New York.”

“Like many New Yorkers, I consider my animals, Buddy and Ace, an extension of my family,” said Senator Sue Serino, Senate Co-Chair of Animal Advocacy Day. “Their health and safety—and the wellness of animals across New York—are a high priority for me and I am proud to be Co-Chairing an event that gives them a real voice and raises awareness for the issues that impact their lives each and every day.”

“Like so many other families, my family enjoys the love and affection of a special four-legged friend. We rescued my dog Django from a kill shelter; so the protection of animal rights is dear to my heart," said Assemblymember Didi Barrett (D-Columbia-Dutchess), prime majority sponsor of the Animal Abuser Registry Bill. “But not every animal is raised in a safe and loving home; too many are abused and neglected each and every day. I will continue to fight to ensure individuals who abuse animals are identified in an effort to reduce recidivism and prevent future acts of violence.”

Saratoga WarHorse Executive Director Katherine Pelham was a special guest at Animal Advocacy Day. Saratoga WarHorse is an equine therapy program that uses retired race horses to help veterans recover from post-traumatic stress disorder.  Also speaking were Rensselaer County District Attorney Joel Abelove, who prosecuted one of the first Buster’s animal cruelty felony law cases in the state, Saratoga County Sheriff Michael Zurlo and his K-9 units, Richard and Rosemarie Nash who adopted Hudson, one of the Railroad Puppies that was nailed to railroad tracks in Albany, and acting dog Bocker the Labradoodle who has had numerous film and television appearances.  .

This bipartisan event enabled animal supporters to network, share information and lobby their legislators to raise awareness of the need to protect pets and people from abuse. Over 50 exhibitors including rescues, shelters, and animal advocacy groups took part.

According to the ASPCA, 62 percent of American households have a pet. Studies have shown companion animals can provide a variety of positive health benefits, including providing comfort and assistance to seniors and people with disabilities. They help police, fire departments, and search and rescue efforts to keep citizens safe. It’s been widely reported that a military canine went in with U.S. Navy Seal Team 6 when they took down the world’s most notorious terrorist, Osama Bin Laden.

Buster’s Law created the felony category of "aggravated cruelty to animals," punishable by up to two years in prison and a $5,000 fine.  The law was named after an 18-month-old tabby cat that had been doused with kerosene and burned to death by a Schenectady teen. Prior to this bill becoming law, animal cruelty resulted in only misdemeanor penalties, if any charges were imposed at all.

Since the 1997 arrest that inspired the creation of Buster's Law, the perpetrator who abused that helpless cat has been imprisoned for various crimes, including attempted rape, sexual abuse and unlawful imprisonment of a 12-year-old girl.