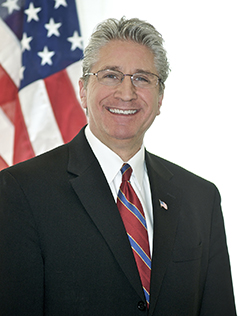 James Nicholas Tedisco (R,C,I, REF-Glenville) was elected to the New York State Senate to represent the 49th State Senate District on November 8, 2016. The 49th Senate District includes parts of Saratoga, Schenectady and Herkimer Counties and all of Fulton and Hamilton Counties.

Senator Tedisco serves as Chairman of the Social Services Committee and a member of the Crime Victims, Crime and Correction, Codes, Banks, Health, Elections, Environmental Conservation, and Libraries Committees, as well as the Senate Task Force on Heroin and Opioid Addiction.

Prior to being elected to the state Senate, Tedisco served in the New York State Assembly from 1983-2016 and served as Minority Leader from 2005 to 2009. Throughout his career, Senator Tedisco has been a leader and outspoken advocate for reforming state government and the budget process and making government more accountable to the people.

The Associated Press, in a story on effective legislators in state government, noted Tedisco’s success in being able to “break through with ideas that affect New Yorkers.”

In 2014, Tedisco sponsored and helped pass a constitutional amendment, Proposition 2, to save millions of tax dollars, make the legislature more efficient and stop the wasteful printing of paper that’s placed on legislators’ desk by enabling digital copies of bills to suffice.

As the author of the first property tax cap bill, the Property Taxpayers Protection Act, Tedisco ushered in and helped pass the tax cap to finally put a lid on out of control property tax hikes. To date, the tax cap has saved New Yorkers $15.3 billion and Senate District 49 taxpayers $344.5 billion.

Realizing that animal cruelty is a bridge crime and those who abuse animals often go on to hurt people, Tedisco was the driving force behind passage of the landmark Buster’s Law to protect our pets by making animal cruelty a felony.

Tedisco graduated from Bishop Gibbons High School, received his B.A. in Psychology from Union College and earned a graduate degree in Special Education from the College of Saint Rose. While at Union College, he received numerous athletic awards for his talent on the basketball court, as well as other collegiate and civic awards for academics, character, community service and conduct. He served as a special education teacher, guidance counselor, coach and athletic director for about ten years.

Tedisco is a resident of Glenville where he lives with his wife Mary, son Andrew, dog Gracie and cats Glinda and Elphaba.