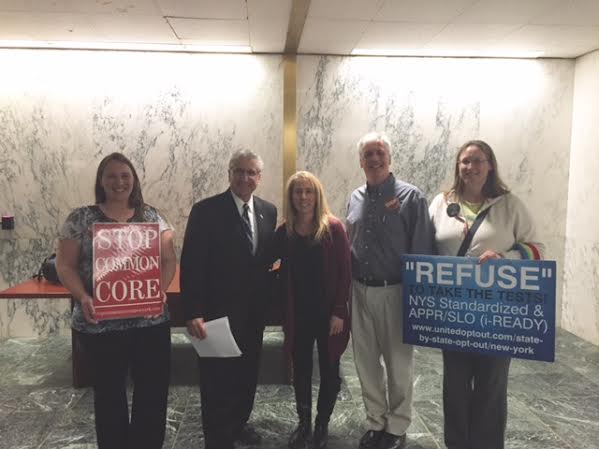 As a former public school special education and resource room teacher, I’m not opposed to higher standards and standardized testing.

But standardized tests must be developmentally appropriate for the age of the students taking them and the tests should be just one of a myriad of diagnostic tools to measure teacher effectiveness and a child’s academic performance, and not the Holy Grail for determining success.

Any standardized test should be integrated holistically into a school’s curriculum with input from New York teachers, administrators and parents, along with several other measures that influence how and if children learn.

The Common Core’s heightened emphasis on standardized testing is forcing teachers to spend too much time teaching to the test rather than engaging children in true learning. The tests are too long as well as developmentally inappropriate for the grades of the children taking them.

Tests and how they are weighted in evaluating teachers and schools do not take into account the socio-economic and developmental factors that play a major role in how students learn. Nor do they factor in the different needs of students from high-need, low-wealth districts that don’t have the same resources as more affluent schools.

This past April, 20 percent of New York parents with children in grades 3-8 exercised their constitutional rights to express their displeasure with Common Core tests and how the standards are being implemented by refusing to have their kids take the exams.

The Governor and state education leaders are still coming to grips with how to respond to the growing opt-out movement and the frustration felt by many students, parents and educators about the tests and Common Core curriculum.

Renaming and rebranding Common Core as some have proposed is not going to solve the problem.

It makes one mindful of the analogy of putting lipstick on a pig. It’s still a pig. A new name is not going to make Common Core any prettier, effective or acceptable to students, parents, educators and school administrators.

While this new Common Core panel has some educators as members, there is no sizable representation from any of the parent/teacher groups who have been critical of the standards and tests. Nor is there a task force member from the Assembly who also has real world experience as an educator.

If this task force is serious it will recommend, and the administration, Regents, and our State Education Department will implement, a real overhaul of Common Core that does more than just change its name but actually respects educators and encourages students’ love of learning.

We need high standards and appropriate testing primarily as a diagnostic tool. However, our state’s leaders must understand that the solution to having children meet those standards does not lie solely on what’s going on in the brick and mortar of our school buildings but in the socio-economic environment of the homes and communities where they live.

Until those needs are addressed, Common Core, or whatever name they call it, will experience little success at best and continue to be as the Governor declared, a “failure.”