Tedisco & Taxpayers: When is the Legislature Going Digital?

Assemblyman who was driving force behind passage of Prop 2, calling on state legislature to stop wasting time, tax dollars and go paperless as 77 % of voters decided 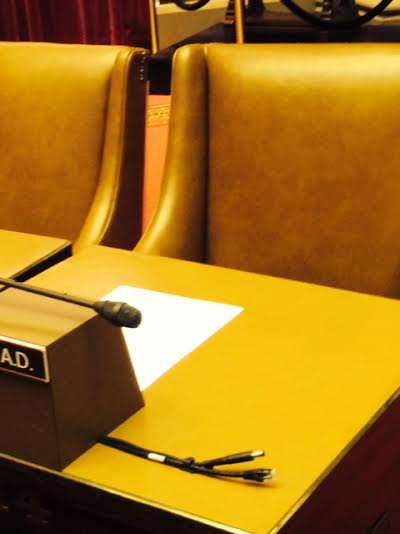 Assemblyman Jim Tedisco (R,C,I-Glenville) today called on legislative leaders to stop wasting time, tax dollars and paper and immediately begin the implementation of Proposition 2 to enable electronic copies of legislation to suffice on all 213 legislative desks.

Proposition 2 passed overwhelmingly on November 4th with 77 percent of the vote statewide. Tedisco sponsored, debated and strongly promoted Proposition 2 to save taxpayers millions of dollars, make the legislature more efficient and help the environment by stopping the waste of paper at the Capitol.

“It’s been over three months since Election Day and the new legislative term began 41 days ago but almost nothing’s been done to ensure the Legislature adheres to the will of the people who passed Proposition 2 overwhelmingly to stop wasting tax dollars and paper and go digital at the state Capitol,” said Tedisco.

“So far, just one row of desks in the Assembly chamber has been wired to connect to a computer or tablet to display legislation. That’s it. Zero progress when it comes to stopping the waste of tax dollars and the environment by taking all the bills off the members desks and bringing this legislative body into the 21st century as Proposition 2 requires,” said Tedisco.

“What’s the hold-up? This shouldn’t be rocket science. Find an affordable tablet or computer and have an app that’s dedicated to the state legislature’s Legislative Retrieval System so lawmakers can view bills, bill memos, committee agendas and legislative calendars,” said Tedisco.

“They don’t need to reinvent the internet here.  This should have been done after Election Day,” said Tedisco, who noted that after computer devises are installed, members will still have to be trained on how to use them, further delaying full implementation of the voters’ wishes.