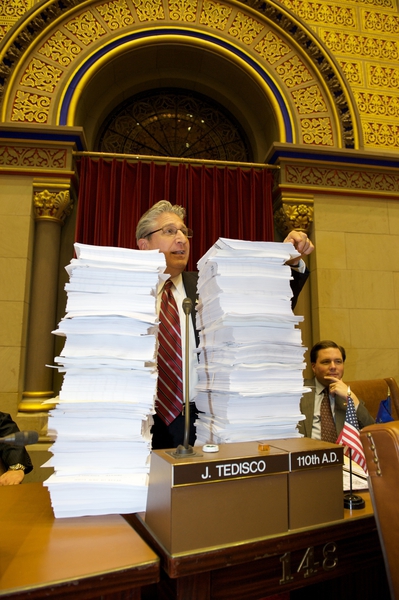 There shouldn’t be a limit on introducing ideas inspired by the needs of our constituents but there should be a limit on the amount of paper used when the legislature could easily go digital.

I previously debated the Assembly Ways and Means Committee Chairman to learn how much taxpayers are spending on all the printing of legislation and paper in Albany and uncovered that they’re on the hook for $13 million a year to pay for all the legislative printing, and up to $40 million just to haul the waste away.

That’s an obscene amount of money to spend on paper when our state has so many other pressing spending priorities.

Travel down the hallway on the third floor of the Capitol and on the second floor of the Legislative Office Building and you’ll find what I’ve dubbed the “Bunker of Bills.”

These four separate document rooms, two for each house of the legislature, are loaded from floor to ceiling with hundreds of thousands of paper copies of legislation in little steel cabinet cubbies just waiting for someone, anyone, to pick them up.

The document rooms look like something out of the scene from the very end of the film Raiders of the Lost Ark, where the Ark is wheeled into a warehouse full of crates.  Bills are carted into the document rooms but virtually no one stops by to claim them.

That’s why I’m also sponsoring the Legislative Online Paperwork Reduction Act (A.6080) to save taxpayers millions of dollars by ending the unnecessary printing of state agency, university, authority and legislative reports, digests and the thousands of bills that sit in the document rooms. This bill could be implemented immediately, if passed, as it does not require a constitutional amendment.

It would be a shame to waste this opportunity to save up to 53 million tax dollars, make Mother Nature smile by conserving pristine forest lands and move state government into the 21st century with its communications.

With passage of Proposition 2, on November 4th, voters will be able to consider: “To go digital, or not to go digital?” After all, taxpayers have 53 million green reasons to vote yes.