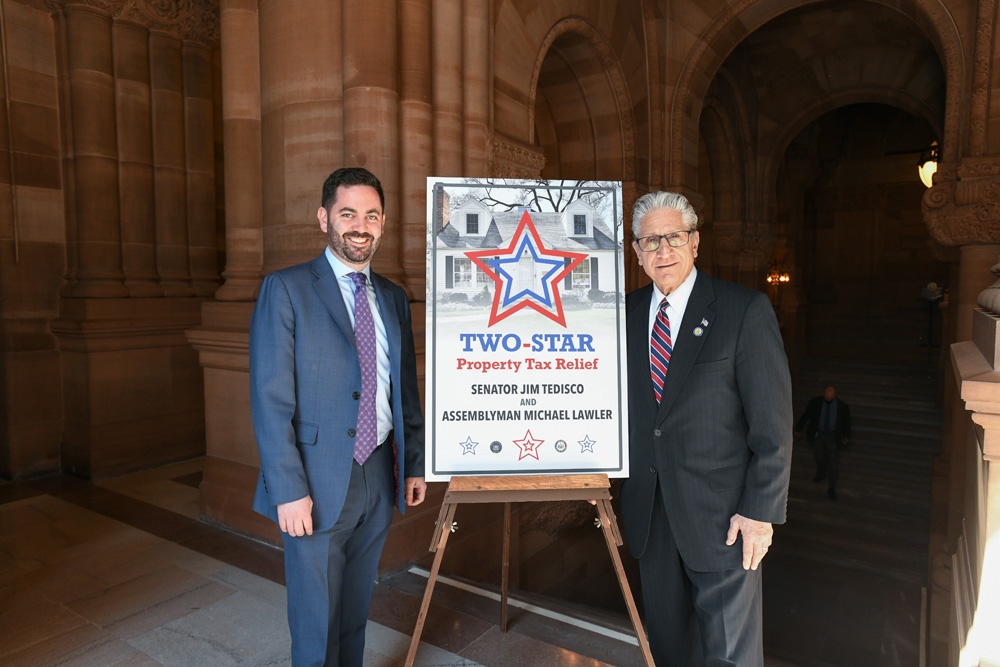 With inflation at its highest levels in four decades, gas prices through the roof, and New York State consistently ranking at the top of the highest tax burden in the nation, Senator Jim Tedisco (R,C-Glenville) and Assemblyman Mike Lawler (R,C,I,SAM-Pearl River) today announced new legislation they are sponsoring, “TWO-STAR,” to help more homeowners continue to afford to live in New York and lessen the exodus of people who are fleeing to other states with less onerous taxes.

Senator Tedisco and Assemblyman Lawler’s “TWO-STAR” legislation would double the tax relief benefits for all those who qualify for the existing basic School Tax Relief (STAR) program and Enhanced STAR program for seniors.

In a revolutionary move, “TWO-STAR” would eliminate school property taxes for homeowners age 80 and over who currently qualify for the Enhanced STAR program.

Taxes will no longer be eternal for Enhanced STAR recipients once they turn 80 as Tedisco and Lawler’s “TWO-STAR” bill eliminates the need to pay school property taxes for those who qualify for Enhanced STAR in the 80+ age bracket.  About 650,000 New Yorkers receive the Enhanced STAR program.

“They say the only certainties in life are ‘death and taxes’ and in New York you can be certain that homeowners are buried in high taxes.  While we’ve made some progress in containing property tax increases with the property tax cap, there’s much more that needs to be done to ease New York’s highest in the nation tax burden so another 319,000 New Yorkers like last year, and over a million in the past decade, don’t pack up and leave the state. With the federal government’s help and a large state surplus, this year, we can help homeowners double their basic STAR benefits with our ‘TWO-STAR’ plan and for some seniors, end New York’s tax eternity by eliminating school property taxes for residents age 80 and over,” said Senator Jim Tedisco, the author of New York’s first Property Tax Cap bill.

“At a time when New Yorkers are experiencing record levels of inflation, sky-high gas prices, and pay some of the highest property taxes in America, we have an obligation to act and provide real and lasting relief for New York’s hardworking taxpayers and our seniors living on a fixed income.  Rather than spend billions of dollars on wasteful spending and new entitlement programs, we should help folks stay in their homes by helping reduce their property tax burden. I’m proud to introduce this legislation in the Assembly and encourage all of my colleagues to demand it’s adoption in our state budget,” said Assemblyman Mike Lawler.