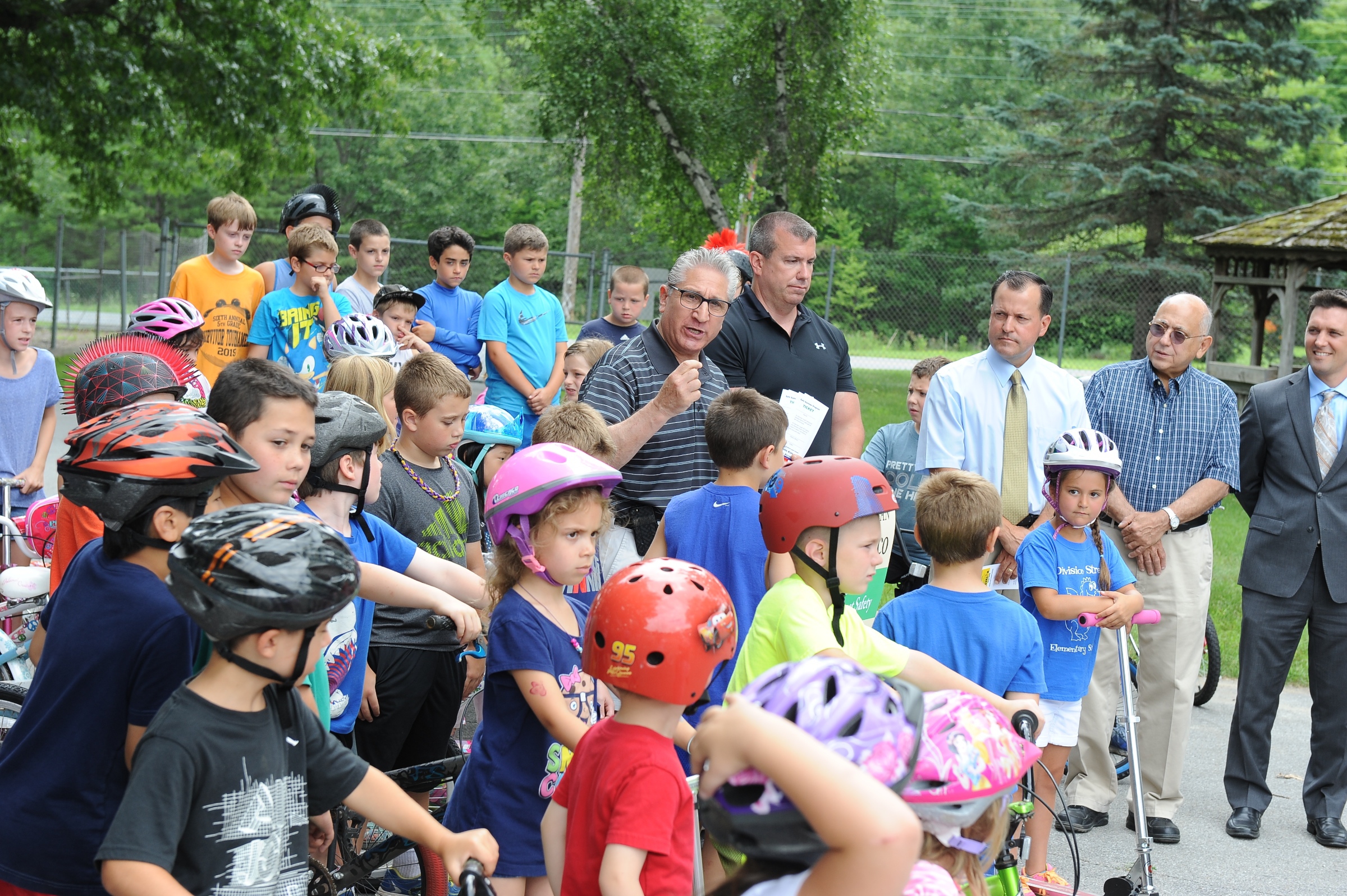 Children in Saratoga and Schenectady Counties will have an added incentive to stay safe this summer as Assemblyman Jim Tedisco (R,C,I-Glenville) is partnering with local officials and businesses and 12 area police departments to launch the 2015 Safe Summer Bike Helmet program.

Tedisco today joined local officials and businesses, police and kids at the Town of Milton summer camp to kick-off this year’s program to distribute 5,000 “good tickets” for free ice cream to reward children who wear their helmets while bicycling, skateboarding, and rollerblading, and give free bike helmets to kids who need one.

It’s the law in New York State that children up to age 14 must wear a bicycle helmet. According to the New York State Department of Health, an average of 54 New Yorkers are killed each year in bicycle crashes and 19,000 residents are treated at a hospital due to bike-related injuries.

Head injuries are the leading cause of death and permanent disability in bicycle crashes, accounting for more than 60 percent of bike-related deaths. The cost of a bicycle helmet is approximately $20.00. The average charge for a hospital stay due to a bicycle related brain injury is $23,000 with an average length of stay of four days. In New York, annual hospitalization charges related to care for persons with a bicycle related brain injury is $20 million.

“One thing you can count on this summer is children are going to ride their bikes and exercise and they will want to eat ice cream. The Safe Summer program reminds kids to wear their helmets while rewarding good behavior with coupons for free ice cream cones,” said Tedisco. “This program is a true community partnership among businesses, law enforcement, government and parents and it’s a model for how caring people can come together and promote a fun and safe environment for children. The Safe Summer program uses positive reinforcement to get all neighborhood kids into the habit of wearing their helmets for safe biking and promotes positive interactions between children and law enforcement.”

The Safe Summer program is made possible thanks to donations from participating businesses: Stewart’s Shops, Friendly’s, Hayner’s Ice Cream Hall of Fame in Halfmoon and Ben & Jerry’s.  The law firm of Martin, Harding and Mazzotti LLP is donating hundreds of new bike helmets to police departments in the Capital Region to distribute to children who need them.

“I want to thank Assemblyman Tedisco for choosing the Town of Milton for this much needed and important event,” said Supervisor Dan Lewza. “The ultimate goal for every parent and municipality is to not only provide a fun environment for their children but also, and more importantly, to keep them safe. This event will go a long way towards ensuring this happens.”

“The safety of our children is paramount. The Safe Summer Bike Helmet Program allows us to pass on simple, yet effective ways to teach kids how to safely handle their bicycles in a fun atmosphere,” said Saratoga County Sheriff Michael Zurlo.

“This program serves as a fun and informative reminder to kids on the importance of wearing a helmet while riding their bikes. It also serves as another important reminder to motorists about the potential consequences of distracted driving and the need to watch closely for kids, bikes, motorcycles and pedestrians this summer. Thanks to Assemblyman Tedisco for his annual work on this fun and informative program,” said Saratoga County Clerk Craig Hayner, who also owns Hayner’s Ice Cream Hall of Fame in Halfmoon.

“Bicycle helmets are paramount in protecting children, as well as adults, from sustaining head injuries when involved in bicycle-related accidents.  Our firm sees the devastating effects that these injuries can have on families and their communities.  We are hoping that the bicycle helmets we provide will raise awareness and make our community a safer place,” said Daniel Dagostino, Managing Attorney for Martin Harding & Mazzotti, LLP