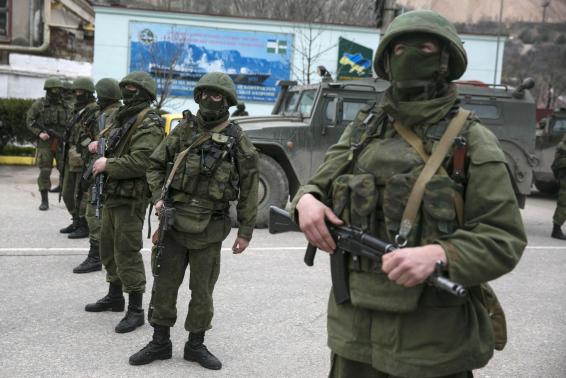 Russian troops in Ukraine -- from Reuters.

Assemblyman Jim Tedisco (R,C,I-Glenville) received some key bi-partisan support today for his efforts to urge the state’s Congressional delegation to condemn Russia’s invasion of Ukraine and to immediately withdraw its troops from the sovereign nation.

Democratic Assemblyman Alec Brook-Krasny (D-46th Assembly District-Brooklyn), the first Soviet-born, Russian-speaking Member of the Assembly, has signed onto Tedisco’s resolution as a co-sponsor and is urging his counterparts in Washington, D.C. to send a crystal clear message to Russian autocratic President Vladimir Putin, that invading a sovereign nation is an unacceptable violation of international law.

“We are calling on the United States Congress to condemn the actions of the Russian Government in Ukraine. Russia’s invasion of Crimea, and other areas within Ukraine, constitutes an act of aggression against the sovereign nation of Ukraine. This act in violation of the democratic will of Ukraine’s people cannot be tolerated. It is imperative that the United States and the international community join with the Ukrainian people to defend their right to be independent,” said Krasny.

“President Ronald Reagan, whose leadership and policies helped end the Cold War, eloquently spoke of the United States as a ‘shining city on a hill,’ If we are to continue to be that beacon of freedom and democracy for all the world to see, then our elected representatives have a moral imperative to speak out against Putin’s invasion and occupation of the Crimea and Ukraine,” said Tedisco.

“History has shown time after time that America cannot kowtow to bullies like Putin who use coercion to force their will on free people. The New York State Assembly asserts itself on many issues large and small. It should not remain silent on this one,” said Tedisco.